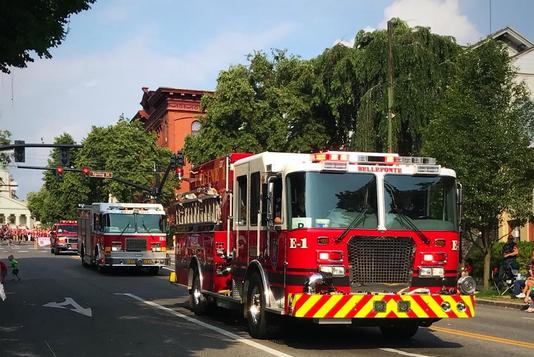 ​​​​    Bellefonte, Centre County, Pennsylvania, was settled in 1795. Bellefonte became 'incorporated' as a Borough in 1806. During the last year of the Civil War,

1865, a fire swept along the entire west side of Allegheny Street, from High to Bishop Streets, clearly demonstrating the critical necessity of a better form

of 'fire control.' Firefighting was done by bucket brigades during this time in history. In 1868, the history of Logan Fire Company No. 1 begins.

There is tradition, commitment, honor, pride, strong sense of community service, and love for community within the walls of the Logan Fire Station.

We are a "family-oriented" organization, 152+ years of service.

Our motto is:"Where Duty calls, there you will find us." 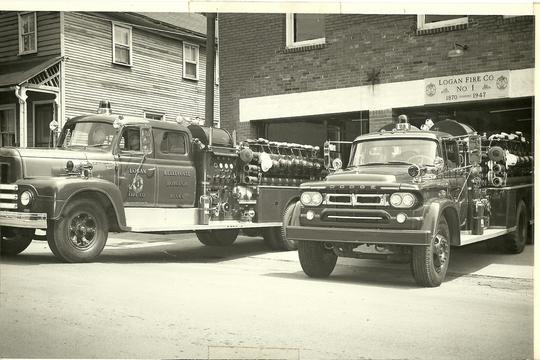 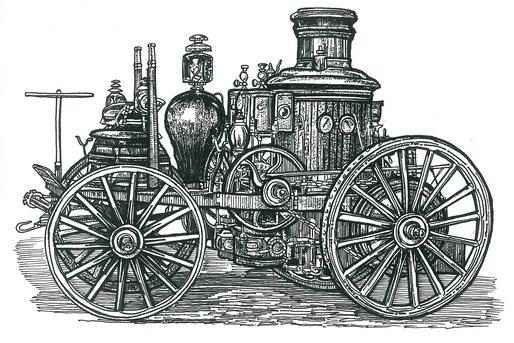 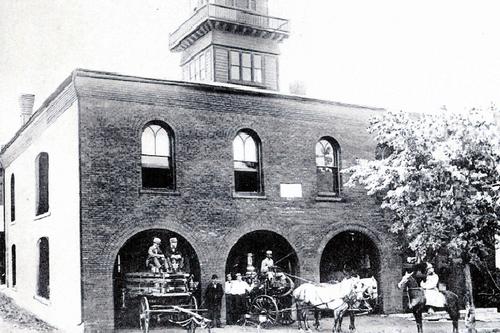 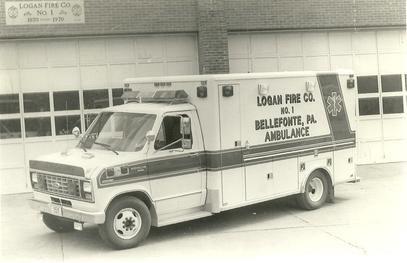 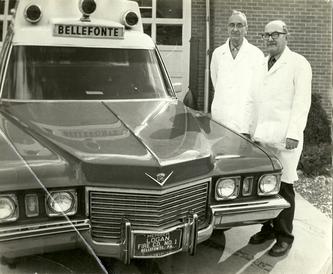 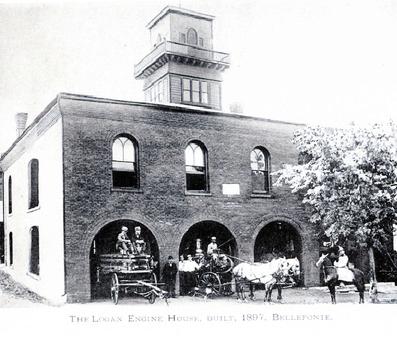 The Logan Fire Company No. 1 had been organized and re-organized, all within the first two years of its initial existence,

During the last year of the Civil War, 1865, a fire swept along the entire west side of Allegheny Street, from High to Bishop Streets,

clearly demonstrating the critical necessity of a better form of fire control. Fire fighting was done by bucket brigades during this time

In 1868, the Bellefonte Borough purchased a hose-carriage from the Schuylkill Hose Company of Philadelphia. The Logan Hose

Company was then organized with 53 charter members. John N. Lane was chosen foreman. Headquarters was on a site then

occupied by the Morris Levine home at 139 West Howard Street. From 1868 to 1870, meetings were held in a stable which was

located on the property. This organization lasted until 1870, and then, because of a lack of appropriations by the Borough Council

for maintaining the company, it disbanded.

February 9, 1870, members of the Bellefonte Fire Company met in the Borough Council chambers for the purpose of

Franklin Hillibish, Plugmen; and John N. Lane, James F. Armor, and a "Mr. Dooley,: as directors. There were 58 charter members.

February 25, 1870, the membership met to vote on an official name for the fire company. Two names were proposed:

Logan and Victory. Logan won out due to the support of the name by the "President" of the company. The "Chief" and his

supporters favored Victory. The members of the Logan Fire Company returned to their old stable on West Howard Street.

from Unionville. On that same day, all fire plugs were tested within Bellefonte.

The Logans fought their first fire on August 20,1870, a stable fire on Pike Alley. During the 1870's, a great rivalry existed between

the Logans and Undines, another fire company which formed within Bellefonte in 1871. This rivalry generated quick responses, as

each company would race to be the "first" on scene. Far too often, the companies would swiftly arrive at a fire only to find that

the Bellefonte Borough water system could not provide adequate water until they started the steam pumps at the "Big Spring." As a

result, both companies would race to a fire with a full complement of equipment, only to stand-by and watch buildings burn to the ground.

The Vice President was Schuyler Colfax, Speaker of the House was James G. Blaine, the 41st Congress was in session.

-- Virginia rejoins the Union, during the Reconstruction era, Jan 26th.

-- Military control of Mississippi ends, and it is readmitted to the Union, Feb 23rd.

-- Hiram Rhodes Revels, Republican from Mississippi, sworn into the US Senate, becoming the first African American ever to sit in the

-- Texas is readmitted to the Union following Reconstruction, Mar 30th.

-- US Congress creates the US Department of Justice, June 22nd.

-- Christmas is declared a federal holiday in the United States, June 26th.

-- Reconstruction, Georgia becomes the last former Confederate state to be readmitted to the Union, July 15th.

Reconstruction Era ( 1865 - 1877 )   following the Civil War, transformation of the Southern U.S., directed by Congress, with

reconstruction of state and society.

workers, much higher than in Europe, attracted millions of immigrants. Railroads were the major industry.

In 1871, Mr. E. C. Humes, then president of the First National Bank in Bellefonte, built a building on the site and leased it to the

borough for the Logans to use as a new fire hall. The meetings were no longer held in the stable.

a charter membership of 94. Daniel Rhoades, superintendent of the historic Bellefonte and Snow Shoe Railroad, was elected president.

In December 1890, the Logans purchased from the Silsby Company, located in Seneca Falls, N.Y., one of their "best and latest

improved" steam fire engines, a powerful machine for throwing water. By 1895, the Logans had a hose carriage with 500 feet of fire

hose, hose cart with 400 feet of fire hose, and a "hook and ladder" truck. Other equipment noted was gum overcoats and boots, dress

at the West Howard Street Fire Hall were such, at the beginning of 1897, the public felt the need for a new headquarters for the Logans.

February 20, 1897, the old building caught on fire. The temper of the times among the populace was such that there was little or no

care whether the old fire hall burned to the ground or not. Notwithstanding this sentiment, the Logans saved their old location

August 5, 1897, the Borough Council formulated plans to build a new "Borough Hall" on a site purchased from John P. Harris in

He was a former United State Senator and the grandfather of former Pennsylvania Governor Andrew Gregg Curtin. Originally,

the location was all one property and owned by Senator Gregg. In the layout of the borough, by James Harris and Colonel Dunlop,

it was known as "Lot 109," It fronted 50 feet on North Allegheny Street and ran 200 feet along the south side of East Howard Street

Senator Gregg, in his will dated January 2, 1834, left the property to his daughter, Mrs. Jane Gregg Curtin, It was noted at the time

that there was a "two-story stone house" erected on the site. When Mrs. Curtain died, she left it to her son, Governor Curtin.

who was born on the site September 2, 1808. Her maiden name was Irvin, daughter of John Irvin, an early settler in the Linden

recorded, although the deed was "entered and recorded" on October 31, 1894, John P. Harris, "as trustee," sold it to the borough

It was designated that the new building "Borough Hall" would house the council chambers, Logan Fire Company No. 1, Borough

William Brachbill, local merchant and member of the Council, introduced a resolution that the bid of Ben Bradley, local contractor,

be accepted for the construction of the building in the amount of $3,945, providing that the Finance Committee can find suitable means

for obtaining the money.

April 20, 1897, Mr. Bradley got construction underway. He removed an old structure on the lot that had been the home of the

for the disbandment were due to the inability of providing enough men to man their apparatus. After disbandment, the apparatus,

a Hays truck, was turned over to the borough, then given to the Logans. Bellefonte went from three fire companies back to two, the

Logans and the Undines.

The new 'Borough Hall' and home of the 'Logan Fire Company No. 1,' constructed of 'Mill Hall pressed brick,' was completed on

With this new location and building, to the general public, it was the 'Logan Fire House.' Technically, it was the 'Borough Hall,'

since the borough owned the property.

Characteristics of the new building:

- The Logans  outfitted their meeting room with a 'Brussels carpet,' 48 cane-seated arm chairs, and beautiful chandeliers

- Another highlight: 'the bathroom had hot running water'

The company became 'mechanized' on November 6, 1917, when they purchased their first motorized vehicle, a Pierce-Arrow touring

car from Col. W. Fred Reynolds for $1,500. The top of the car was 'sawed off' and the remainder of the auto was converted to a

The second piece of motorized equipment was a Model T Ford. The chassis had upon the rear, a mounted front end of a Ladder Wagon.

In the early 1920's, the Logans experienced a bad fire at the Bellefonte Academy. Mutual aid was called from Lock Haven.

Lock Haven responded by sending a pumper. This proved to the town that Bellefonte needed a motorized pumper. Lock Haven

brought one of theirs to Bellefonte and gave a demonstration. Soon after, The Logans acquired their first pumper which was a Studebaker.

Company Ambulance Service.' It was determined that the word 'Club' was not appropriate, that 'Service' was a much better word.

In October 1965, the Logan Fire Company No. 1 purchased from the heirs of the Hamilton estate, three frame homes on East

Howard Street, immediately east of the 'Borough Hall' building. The purchase comprised a frontage of 120 feet on East Howard Street

and the total distance between Decatur Alley and Penn Street, depth ranges from 120 feet along Penn Street to 129 feet on Decatur

Alley. The purchased price was $12,500. The plan for the purchased properties was, remove the three single family homes, level the

lots, and convert into parking places for now. Eventually, the big plan was to build their own fire house. The property was entirely paid

for by company funds, earned through various fundraiser activities over the years. At this time, some of the Logan officers were:

this time was Charles C. Brown. Mr. Brown took very good care of the Logans during the purchasing of the properties, the signing of all

In 1969, the Logans answered sixty-seven emergency calls, five of which were false alarms. Equipment was used a total of

seventy-seven hours and twenty-six minutes, an average of twenty-six men. During the same year, the ambulance service responded to

five hundred and ten calls,. Due to the expense of operating a fire station, getting ready to build their first own fire station, a variety

of fund-raisers were being done, such as carnivals, sales of 'logie' sandwiches, chicken barbecues, raffles, and other activities.

In 1970, the Logans moved into their own fire house at 120 East Howard Street. When it came time for the move, all fire apparatuses

and ambulances moved into the new fire station, with plenty of room to spare. At this time, the Logans presently operated and

maintained seven pieces of equipment. The 'Borough Hall' no longer consisted of the Logan Fire Company No. 1.

at 369 Phoenix Avenue, near the former Match Factory.

Today, approximately 230 individuals are members, but only approximately 30 are 'active.' There had been a succession of equipment

over time and currently the membership has equipment consisting of Engine 1, Engine/Rescue 1, Special Unit 1, and Brush 1.

The fire protection service area consists of Bellefonte Borough, sections of Benner, Marion, and Spring Townships. As of today, the

Logans continue a varity of fund-raisers, such as, the well known mail drives, chicken barbecues, and other activities. As the costs

continue to rise in maintaining a volunteer fire company, the members continue finding creative ways to bring in revenue. We as

The Logans are one of three entities that make up the 'Bellefonte Fire Department.' The other two entities are the

Certificate Program.' The Logans continue to be prepared protecting the lives and properties of the citizens of Bellefonte and

surrounding townships. The Logans still and continue to be, '100% Volunteer.'